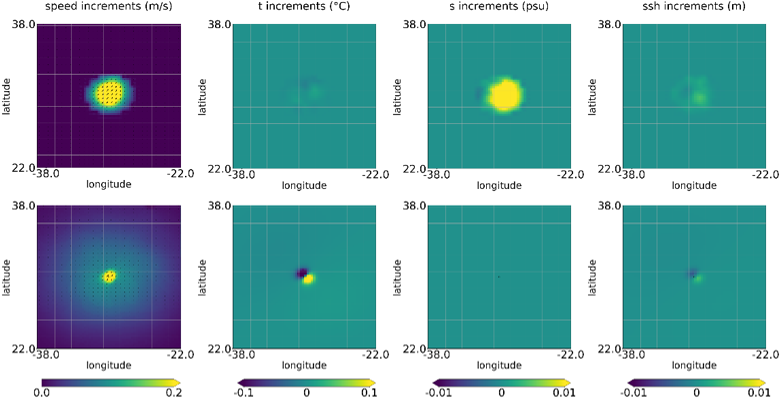 The ocean total surface current velocity (TSCV) is the Lagrangian mean velocity at the instantaneous sea surface (Marié et al., 2020). Accurate forecasting of the ocean TSCV is important for applications such as search and rescue, tracking marine plastic and for coupled ocean/atmosphere/sea-ice/wave forecasting. Direct measurements of the TSCV are currently not available with global coverage. Various satellite missions are being proposed to measure TSCV globally such as SKIM (Ardhuin et al., 2019) and WaCM (Rodriguez et al., 2019). These satellite missions should provide new opportunities for assimilation of velocities into global forecasting systems in the future.

The ESA Assimilation of TSCV (A-TSCV) project aims to investigate the design, implementation and impact of assimilating synthetic TSCV data in global ocean forecasting systems. The project will use observing system simulation experiments (OSSEs) to test the assimilation methodology and provide feedback on the observation requirements for future satellite missions. Synthetic observations are being generated for all standard data types as well as the new observations expected from SKIM-like satellite missions. Two operational global ocean forecasting systems are being developed to assimilate these data in a set of coordinated OSSEs: the FOAM system run at the Met Office (Blockley et al., 2014) and the Mercator Ocean system (Lellouche et al., 2018).

Here we describe preliminary work to compare results of idealised TSCV observation experiments from the FOAM and MOI systems. We also show results of the estimation of horizontal and vertical forecast error covariance information for horizontal velocities.

FOAM error covariances are prescribed through a set of variances, length-scales and balance relationships. For the assimilation of TSCV data, new variances and length-scales are required for the unbalanced components of zonal (U) and meridional (V) velocities. The velocity balance in NEMOVAR is geostrophic so the unbalanced component represents the ageostrophic velocity component. We have used the NMC method (Parrish and Derber, 1992) to estimate the forecast error covariances. The NMC method used 48 hour and 24 hour forecast difference fields, valid at the same time, as a proxy for the forecast error. 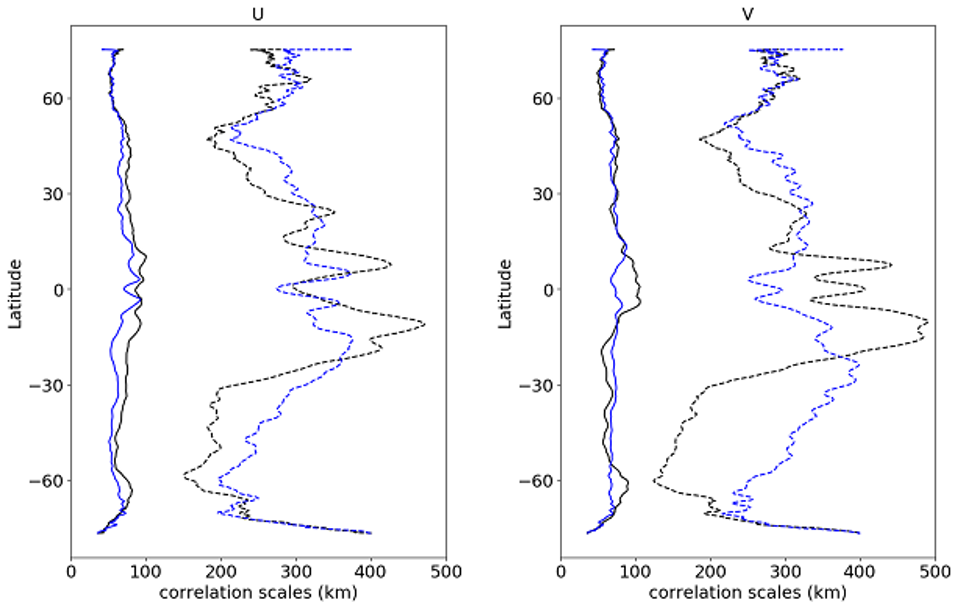 Figure 2. Zonally averaged horizontal forecast error correlation length scales for unbalanced surface U and V. These are estimated by fitting a Gaussian function with two correlation scales to the NMC error covariance data.  Black and blue lines are length scales in the x-direction and y-direction, respectively. Dashed and solid lines are the long and short scale, respectively

To produce an estimate of the unbalanced covariances we applied the inverse of the NEMOVAR balance operator to the forecast difference fields to remove the balanced (geostrophic) component. Fig. 2 shows the zonally averaged horizontal background error correlations for September-October-November for U and V. The short scales for U and V vary between around 40km at high latitudes, 70km at mid latitude and 100km in the tropics. The short U length scales have longer scales in the x-direction by 10-20km at most latitudes, while the short V length scales are fairly isotropic expect near the equator. The longer scales vary between approximately 200km in the mid latitudes to 400km near the equator. Long correlations are seen in the x-direction corresponding to the latitude of the North and South equatorial currents. Interestingly the correlations scales are higher in the y-direction in the mid-latitudes which could be due to the boundary currents.