High-resolution Ocean-General-Circulation-Models (OGCMs) provide realistic scenes of ocean circulation which are extremely useful to build, test and evaluate the impact of an observating system for data assimilation. This is the common technique known as Observing System Simulation Experiment (OSSE) where a non-assimilated model (a “free run”) is considered as a ground-truth used to generate realistic – but synthetic – observations. Then, the observations are assimilated in a system, with possibly a different model, and the results are compared with respect to the ground-truth, as illustrated below. Note that choosing a different model (or/and different forcing) is a way to simulate model error more realistically. Such OSSEs have been widely used in meteorology (e.g. Atlas, 1997) and more recently to design operational oceanography (e.g. Fujii et al., 2019). 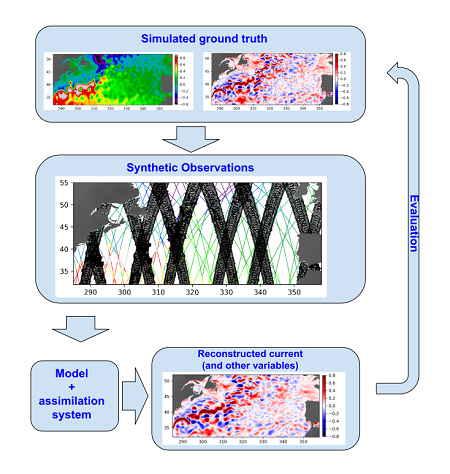 Here, we propose to report on a recent experiment with the MITgcm LLC-4320 (Menemenlis et al., 2021) used as the ground truth to test the impact of a future spaceborne Doppler surface current observing system in combination with an altimetry observing system. In particular, for altimetry, the simulation of a realistic system was not straightforward since a whole chain of processing must be reproduced to get a fair comparison with real/operational assimilation. Indeed, the altimetry signal assimilated by operational centers goes through several steps where rapid signals such as the direct response of the ocean to high-frequency atmospheric winds and pressure, and barotropic tides, are removed. This is mainly because the ‘useful’ signal well controlled by ocean data assimilation schemes is mostly the geostrophic (or quasi-geostrophic) component.   These processing steps are illustrated in the scheme below:

To simulate a similar processing leading to the low-frequency Sea Surface Height (SSH) ready to be assimilated in an operational system, there are a number of specificities that we had to introduce, illustrated on the scheme below. First, the input simulation directly contains the full SSH, including by construction the Mean Dynamic Topography (MDT) and the Sea Level Anomaly (SLA). One could consider computing separately the MDT of the simulation, remove it, and then add the conventional MDT (e.g. CNES/CLS MDT, Mullet et al., 2021). We did not choose that option to avoid strong inconsistencies, considering that mean circulation is a problem already controlled by assimilative systems. Second, the simulated processing can completely bypass the geophysical corrections for obvious reasons.

Figure 3 : Main steps of the simulated altimetry data processing before assimilation in the OSSEs

Third, the removal of high-frequency signals turned out to be the most critical and challenging step. As already reported in previous studies (SKIM phase A), the standard barotropic tide models such as FES (Lyard et al., 2017) do not agree well with the MITgcm tides, or to an extent much beyond the actual errors of the tide models with respect to real observations. This was not surprising considering the sensitivity to bathymetry for instance. To simulate the tide removal more realistically, we therefore chose another option : compute an harmonic analysis for all tidal constituents and apply it as a correction. This was performed over the 1-year series of LLC-4320 with the first 15 main tidal constituents. The figure below shows snapshots of the SSH 6-hour difference, to highlight the high-frequency component. From the first panel with the full signal where the tides obviously dominate the 6-hour difference, we clearly see the signal reduction after applying the results of harmonic analysis. 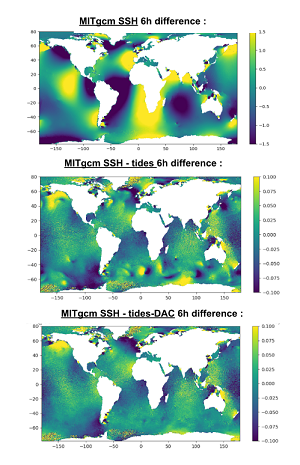 In this second picture, some residuals beyond 10cm still remain. In the Southern Ocean, there are clear patterns looking like atmospheric pressure field changes around local storms. When we applied the second processing with the estimate of the MOG2D model for the Dynamic Atmospheric Correction (DAC, Carrere et al., 2003),  most of the patterns almost disappeared as shown on the bottom panel, certainly well corrected by the inverse barometer estimation.

However, after applying the two main corrections of high-frequency signals (Tides and DAC), some ~5cm large scale signals remain in the open ocean, and locally higher near the coast. Further analysis (not shown) revealed that these residual signals are around the tidal frequencies, but not phase-locked with atmospheric forcing since they do not disappear in the harmonic analysis. We investigated the problem with further harmonic analyses increasing the number of components toward the minor tidal constituents, but this did not remove the residuals. The consequence is that high-frequency signals are present in the data to be assimilated in the OSSEs, at a higher level of energy than in the real altimetry where tidal residuals are known to be sub-centimetric in the open ocean. There is therefore a risk of aliasing in the data assimilation process acting at low-frequency, leading to potential deteriorations.